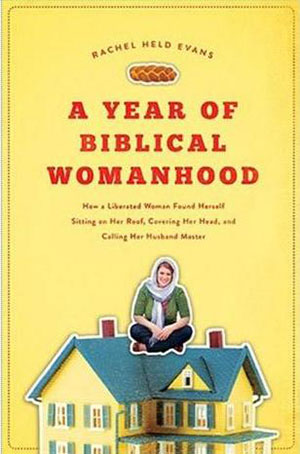 As my co-blogger Chinglican mentioned Wednesday, Rachel Held Evans has a new book out entitled A Year of Biblical Womanhood.  Evans is by her own account attempting to demonstrate that “biblical womanhood” is a misnomer and that the Scriptures contradict themselves on the subject of how a woman should live. “I felt as though ‘biblical womanhood’ was just a phrase being used really carelessly,” she explains in an interview with ABC News. I suspect Evans is right that plenty of people simply assume they know what “biblical” womanhood is without thinking critically; but, whether you find yourself in the complementarian or egalitarian camp on such subjects, her book might be better left alone.

In promotional materials about why she wrote the book, Evans fleshes that out: “I set out to follow all of the Bible’s instructions for women as literally as possible for a year to show that no woman, no matter how devout, is actually practicing biblical womanhood.” The point? To foster “a fresh, honest dialogue… about biblical interpretation.”

And that’s precisely what’s wrong with Evans’ latest book. Its deliberate lack of interpretive method. Evans sets out to “follow all of the Bible’s instructions for women,” she says, but what she includes in the category of “instructions” is rather ludicrous. First off, the ceremonial laws of the Old Testament are back in force (even though they’re explicitly superseded in the New Testament, so no Christian is expected to abide by them). Kathy Keller, in an insightful review, notes wisely that Evans would have done better to “attempt to live by all the commandments the Bible genuinely addresses to Christian women, while discussing the rules of responsible interpretation along the way.” That’s not what Evans does. Rather, Evans seems to take all references to women in the Scriptures as if they were imperative—including (and this boggles my mind) narrative. Even the most basic hermeneutic principle (the description/prescription dichotomy) is simply ignored.

The resulting stick-figure of “biblical womanhood” Evans constructs is unsurprisingly easy for her to beat up on. And it’s hard to have “fresh, honest dialogue” when you’re simply ridiculing the idea that there could even be something like biblical womanhood at all.

Case in point (and this comes from a review by Douglas Wilson):

Proverbs 21:9 says this: “It is better to dwell in a corner of the housetop, than with a brawling woman in a wide house.” The ESV has quarrelsome for brawling, and the NKJV has contentious. One gets the idea. Still, it is a verse with a woman in it, and so one must do something.

What Evans did was this. Whenever she caught herself being verbally inappropriate, she put a penny in a jar, and every penny represented a minute she had to go up and sit on the roof of her house.

This is where I clear my throat tentatively, not sure I could have heard this right. But I did, and there are three obvious things that can be mentioned right off the top. First, the text says that it would be better for the husband to be up on the roof than downstairs with Rachel Held Evans when she is being bad. So what’s she doing up there?

Second, the text says nothing about penny jars, or each penny being worth one minute of penance time on the roof. Her suggested mechanism for biblical applications can be illustrated on this wise. The Bible says to be anxious for nothing (Phil. 4:6), and so what if I arbitrarily penalize myself with a minute of hopping on one foot on my front porch every time I find myself being anxious? How about that? But such hopping on one foot, waving at the traffic, is not making the apostle look silly. So we may conclude from this aspect of it that when Rachel Held Evans set up shop to teach us what the Bible says about womanhood, it took her about ten minutes to start producing Talmudic arcana and extra rules instead of straight Bible. Not only extra rules, but dumb ones.

Ouch. It’s this deliberately silly Talmud that Evans is living out in the book, Wilson suggests, not actual biblical instructions for women. At any rate, he says, “I think we have better things to do than learn about biblical womanhood from someone who is having trouble distinguishing subjects from predicates.” And then the Chestertonian-esque clincher: “This is a caliber of exegesis that thinks that Jesus went to Capernaum might mean that Capernaum went to Jesus. Who can be sure? Scholars differ on this controversial point.” You can read the whole review at Blog and Mablog.

A more serious and comprehensive review comes from Kathy Keller over at The Gospel Coalition (which I quote from briefly above). I won’t quote it all at length (you should really go read it yourself), but I will highlight Keller’s criticism of one particularly dreadful misreading Evans imposes upon the Scriptures:

Polygamy, concubinage, rape, adultery, and a host of other sins, many of them against women, truly happened and are recorded in the biblical record with unblinking faithfulness. Yet [Evans] cite[s] accounts of historical events such as Genesis 16, 30, and 35 and remark, ‘If you were a slave or concubine, you were expected to be sexually available to your master,’ as if the Bible condones this behavior.

Keller continues: “The Bible is not simply a collection of ethical principles by which to live. It is a record of human sin and of God’s intervention in history to save his people. Much of it should be read as news, just as we read the newspaper. Horrible acts are recorded in my copy of The New York Times every morning, but I don’t commit the hermeneutical error of supposing the editors of the Times are approving or endorsing such behavior.”

What’s disappointing is that Rachel Held Evans (recently recognized by Christianity Today as a leading female author/blogger in their “50 Women You Should Know” story) could have used the book to advance discussion between complementarians and egalitarians, making people on both sides think seriously about what Christian womanhood is/ought to be. Instead, she went with ridicule. And ridicule seldom brings about “open, honest dialogue.”

[As an aside: There’s been a bit of an uproar since LifeWay Christian Stores declined to carry Evan’s new book. Evans has implied/stated that’s because she used the word “vagina” in the book, and multiple groups (Slate, Religion Dispatches, Christian Piatt, The Daily Beast) have all picked up on that rather startling claim. A recent Christianity Today article fact-checks Evans’ assertion, and notes multiple books with multiple occurrences of the word “vagina” are carried by LifeWay. The article also notes that Evans has at other times publicly stated she never received a reason for why LifeWay refused to carry the book.]

Note: It seems unnecessary to have to say this, but readers of blogs being what they are, I’ll be quick to point out that my quoting someone doesn’t mean I necessarily agree with everything they think. Take Wilson for example. I find some of what he’s written incredibly distasteful (and plain wrong), and I recently critiqued a Converge magazine article on masculinity for which he was interviewed. But his (and Keller’s) criticisms of Evans above are insightful and therefore worth considering.